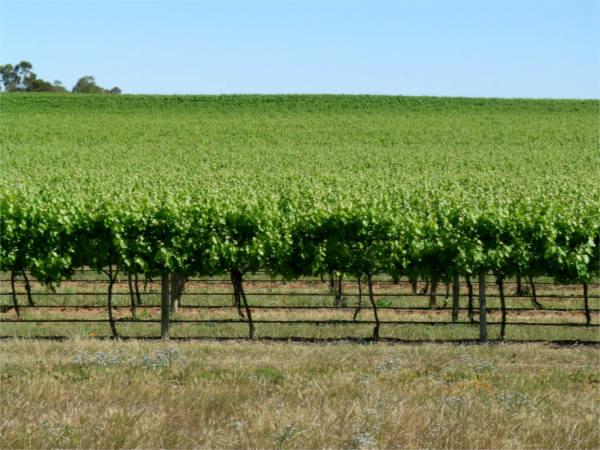 • GrowCare® has its origins back to the wet seasons of 1973/74 and 1974/75 when downy mildew wreaked havoc in most vineyards across south-eastern Australia. Many growers and industry leaders were caught by surprise at the severity and extent of the loss caused by this disease. Many vineyards suffered near total crop loss and the vines were severely defoliated well before normal leaf fall.

• Downy had been first seen in Australia (in Victoria) in the wet season of 1917. Over the years It was subsequently found wherever grapes are grown in Australia....most recently (1997) in Western Australia.

• On average today, downy causes considerable national loss about one year in nine and some levels of loss in another three to five of the nine year cycle. In other years, many growers were spraying ‘just in case’.

• The devastating losses of the 1970s triggered research by the then South Australian Department of Agriculture at the Loxton Research Centre. This work was led by Plant Pathologist Peter Dry who later, as Dr Peter Dry with the University of Adelaide, gained international reputation as one of the nation’s preeminent viticulturalists.

• When Peter left Loxton to pursue his viticultural interests, he was replaced by Peter Magarey who continued investigations into the epidemiology of downy mildew – that is,into determining under what conditions downy mildew infection occurred and how the disease spread. In this, Peter was most ably assisted by Malcolm Wachtel as the pair of investigators conducted various experiments and made detailed observations into the night activities of this disease agent.

• In those days of furrow and overhead irrigation, many growers worked their vineyards through the night. As new knowledge of downy mildew was developed it became clear that a means of sharing this information was needed. Peter said at the time, ‘...we need a way to share the information in our head, with growers who were at work while we sleep!’

• This was at a time in the early-1980s when computers were first being used in Australian agriculture. During a visit to Cornell University in New York, USA, in 1981, Peter had discussed these research challenges with Dr Bob Seem, an international expert in many facets of the foliar diseases of grapes and of downy mildew in particular. Bob subsequently came to Loxton on many occasions and gave the South Australian investigations the depth and specialist help it needed. Bob, Peter and Malcolm, prepared a computer-based system that became the first in Australia and one of the first globally to be used commercially to ‘predict’ infection events for downy mildew for grape growers.

• In recent times with the development of on-line services across Australia, the opportunity became clear to deliver a computer system that automatically generated downy mildew alerts and provided them in easy to access format for grape growers across Australia and in New Zealand.

• To develop this technology, Peter teamed with Riverland locals Michael Western (an electronics designer of Western Electronic Design) and Justin Dixon (a GIS Analyst who co-founded Mapping Services Australia). Michael had designed a low-cost, high-powered weather station that also provided predictions of downy mildew infection events, and of apple black spot infection events. This was a first of its kind for Australia.

• Peter, Michael and Justin now deliver GrowCare® Grapes as an online tool for grape growers to access information on the risk of downy mildew at any time during the growing season. The system also provides a host of additional information for practical help in vineyards. The team is also developing on-line models to provide infection alerts for bunch rot at flowering and near harvest.